Check Out Our New Album! 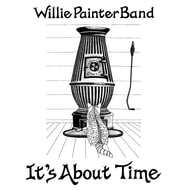 About the band: Playing a mix of danceable blues with a nod towards swinging jazz and an eclectic selection of rock and pop tunes, the Willie Painter Band consists of four veterans of the North Carolina music scene.
​Willie Painter (guitar) and Craig Dittmar (bass) were members of the Boomers, who played for over 20 years in the Triangle and eastern North Carolina. They have performed in the past with Lightnin' Wells and the Real Gone Cats. Currently they also play with Nancy Middleton, the Pigz Brothers, Mike Hamer and the Rhinoceroses, and the Tommy G Experience. Painter wrote a monthly music column for the Urban Hiker from 1999 to 2004.

Bill Newton (saxophone, harmonica) is a founding member of three Triangle musical institutions: Rebecca and the Hi-Tones, Bill Newton's Big Blues Quartet, and the Duke Street Dogs. He has recorded with the Indigo Girls and Big Mama E and the Cool, among others, and toured extensively with singer/songwriter, Jon Shain.